A  cryostat  (from  cryo  meaning cold and  stat  meaning stable) is a device used to maintain low  cryogenic  temperatures of samples or devices mounted within the cryostat. Low temperatures may be maintained within a cryostat by using various refrigeration methods, most commonly using cryogenic fluid bath such as  liquid helium . [1]  Hence it is usually assembled into a vessel, similar in construction to a  vacuum flask  or  Dewar . Cryostats have numerous applications within science, engineering, and medicine Cryostats used in  MRI  machines are designed to hold a  cryogen , typically  helium , in a liquid state with minimal evaporation (boil-off). The liquid helium bath is designed to keep the  superconducting magnet ‘s bobbin of  superconductive  wire in its superconductive state. In this state the wire has no electrical resistance and very large currents are maintained with a low power input. To maintain superconductivity, the bobbin must be kept below its  transition temperature  by being immersed in the liquid helium. If, for any reason, the wire becomes resistive, i.e. loses superconductivity, a condition known as a ” quench “, the liquid helium evaporates, instantly raising pressure within the vessel. A burst disk, usually made of carbon, is placed within the chimney or vent pipe so that during a pressure excursion, the gaseous helium can be safely vented out of the MRI suite. Modern MRI cryostats use a mechanical refrigerator ( cryocooler ) to re-condense the helium gas and return it to the bath, to maintain cryogenic conditions and to conserve helium. 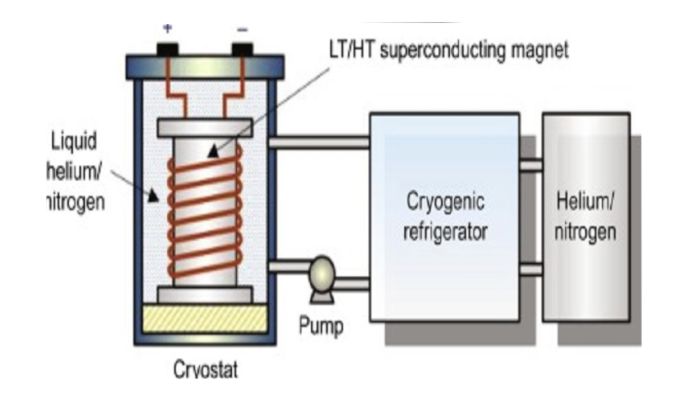