Spin coating  is a procedure used to deposit uniform  thin films  onto flat  substrates . Usually a small amount of coating material is applied on the center of the substrate, which is either spinning at low speed or not spinning at all. The substrate is then rotated at high speed in order to spread the coating material by  centrifugal force . A machine used for spin coating is called a  spin coater , or simply  spinner .Rotation is continued while the fluid spins off the edges of the substrate, until the desired thickness of the film is achieved. The applied solvent is usually  volatile , and simultaneously  evaporates . The higher the  angular speed  of spinning, the thinner the film. The thickness of the film also depends on the  viscosity  and  concentration  of the solution, and the solvent. [1]  The pioneering theoretical analysis of spin coating was undertaken by Emslie et al. [2] , and has been extended by many subsequent authors (including Wilson et al. [3] , who studied the rate of spreading in spin coating; and Danglad-Flores et al. [4] , who found a universal description to predict the deposited film thickness).Spin coating is widely used in  microfabrication  of functional oxide layers on glass or single crystal substrates using  sol-gel  precursors, where it can be used to create uniform thin films with nanoscale thicknesses. [5]  It is used intensively in  photolithography , to deposit layers of  photoresist  about 1  micrometre  thick. Photoresist is typically spun at 20 to 80 revolutions per second for 30 to 60 seconds. 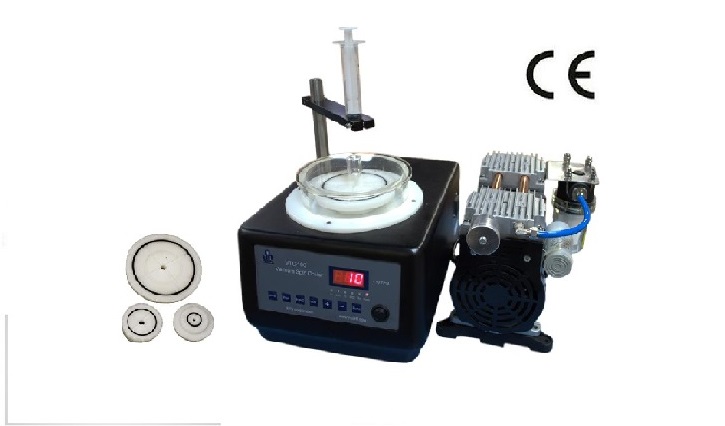